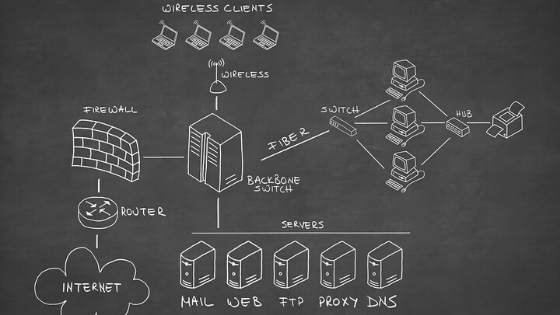 Most modern small businesses rely on technology to operate. You might use your smartphone to check your company email, your tablet to send out invoices, and your desktop to make marketing presentations.  Your team members likely do the same.

No matter what your particular technological configuration is, your company needs a network to securely store and share important information across devices and users. This system of hardware and software often includes both a cloud computing platform (meaning that you save files to a remote server and access them via the Internet) and more traditional onsite storage tools, such as external hard drives or small business servers.

Given the complexity of these networks and the valuable information stored there, ensuring their security is paramount. At TUCU, we strive to help small business owners succeed by educating them and helping them find innovative solutions to their tech troubles, and reliable network support services. In the following post, we cover small business network security statistics and explain what you can do to prevent your company from becoming just another number on the breach list.

Unfortunately, data breaches are all too common nowadays. The first step to combating network security risks is to understand what you’re up against, so consider the following sobering statistics:

As if these numbers aren’t frightening enough, they’re compounded by the fact that many network breaches go completely unreported. In addition, while it may seem counter intuitive, small businesses are actually at greater risk for breach than large companies because hackers know they tend to be less protected, much like car thieves tend to target older vehicles. Your chances of a breach are especially great if your business operates on a BYOD (Bring Your Own Device) model, in which employees use personal laptops, smartphones, or tablets at work. The reason is that as these devices travel from your office to home networks, you are no longer in control of security of the home networks the devices travel to.  The devices can pick up viruses which can then infect your network when the employee returns to work.

The Consequences of Breaches

A data breach for a small business’s network could be debilitating if not devastating. At best, hackers could interfere with the function of your programs, preventing you from operating for a few days, and at worst, they could steal customers data, leaving you liable and potentially ruining your reputation.

Failing to update your small business network security could end up costing you everything you’ve worked so hard to build.

The statistics on small business network security can be alarming, but you don’t have to fall prey to breaches if you simply take the right proactive steps.

Toronto Network Management Providers: When it comes to safeguarding your small business in Toronto, contact TUCU to learn more about our IT security and Managed IT Services. As SMB IT experts who have been serving the Toronto area since 2003, we would be pleased to speak with you about your IT needs.

How To Use Apple Business Manager to Pass Vendor Screenings

How to prevent data loss with a remote work team?

Ready to make some changes?

Speak to our Toronto IT Consultants for options & an estimate.